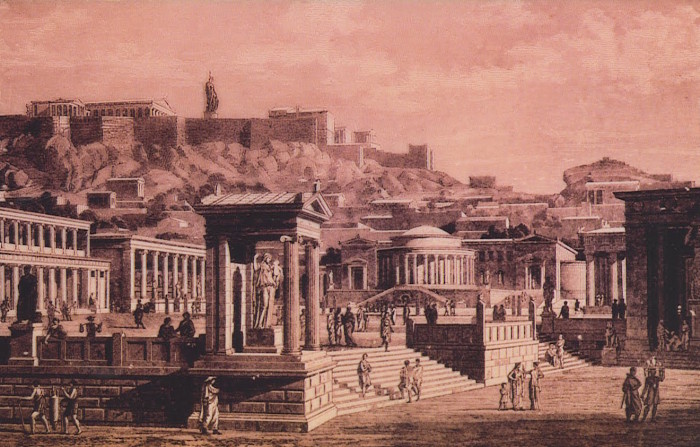 The market economy flourished in ancient Greece 3,000 years ago

By analyzing sediment cores taken from six sites in southern Greece, an international team of researchers claim that the market economy flourished in ancient Greece 3,000 years before what was previously believed.

Researchers have identified trends in grain, olive and vine production indicating major shifts in agricultural production between 1000 BC and 600 AD.

These changes mean that ancient Greece had a market economy that responded to the law of supply and demand three thousand years earlier than previously believed.

This would again make Greece the location of another world first – the world’s first market economy.

It also means that Greece had a relatively sophisticated market system 2,600 years ago, even before Athens became a democracy under the great statesman Pericles.

Instead of simply earning a living by planting whatever the local villages wanted and desired, farmers as early as the Archaic era were already planning their crops according to the needs of international trade.

This means that separate individual markets for a consumer good would merge with others to form one large market, intended for large-scale commerce.

Adam Izdebski of the Jagiellonian University in Krakow, Poland and the Max Planck Institute for the Science of Human History and his colleagues, in an article published in the November edition of The Economic Review of Oxford University Press, say this is proof that a real market economy existed at that time.

It has long been known that trade existed between groups of people as far back as Neolithic times, before humans invented the wheel or even domesticated horses.

And the concept of money and even counterfeit already existed at that time.

But now researchers have combined various fields of scientific research to provide evidence for a market economy in ancient Greece – including even the regions around the Black Sea where the Greeks had settled – characterized by agricultural production. integration and a major expansion of trade.

Indeed, the researchers point out, the closer the farmers were to the Black Sea, the stronger this effect was. These people were already extremely dependent on the import of cereals, in exchange for which they exported olive oil and wine.

Specialization in olive growing and viticulture

“To be able to pay for imports, there is a specialization in the cultivation of olive trees and vines. What we have shown, existing well before Roman times, is to what extent trade was dependent on the survival,” says Izdebski.

In the field of economics, the concept of market economy is widely regarded as a modern phenomenon.

Influential economists such as Karl Marx and Max Weber, for example, argued that although markets existed in antiquity, economies in which the structures of production and distribution responded to the laws of supply and demand only developed in the 19th century.

A recent study by an international team of researchers, however, uses palynology – the study of pollen remains extracted from cored sediments – to challenge this belief and provide evidence for an integrated market economy existing in ancient Greece.

Using publicly available data from the European Pollen Database, as well as data from other researchers, the researchers analyzed pollen from 115 samples taken from six sites in southern Greece to measure the evolution of the landscape over the years studied.

Using radiocarbon dating, researchers tracked the change in percentages of individual plant species between 1000 BC and 600 AD and observed a decrease in grain pollen, a staple of the diet. ancient Greeks, during a period of apparent population growth.

Pollen data cannot prove which grains were grown most, but Izdebski says “written sources show that wheat was preferred.”

This decrease was accompanied by an increase in the proportion of olive and vine pollen. These trends raise an important question: why would local producers choose to plant olives and vines instead of cereals, when demand for this staple was expected to be high, and continue to grow, as the population grew. ?

In the new study, the researchers argue that pollen data from southern Greece reveals an export economy based on cash crops as early as the Archaic period, primarily through olive cultivation.

Although archaeological evidence from these periods documents the movement of goods, quantifiable data on the integration of markets and structural changes in agricultural production have so far been very limited.

“In this paper,” says lead author Adam Izdebski, “we introduce pollen records as a new source of quantitative data in ancient economic history.”

From mud to market economy

Before arriving at their conclusions, the researchers compared the trends they observed in the pollen data with three other data sources in their groundbreaking scientific research.

First, they observed a decrease in pollen from uncultivated landscapes corresponding to each increase in the number of people living in settlements.

The researchers then looked for evidence of increased commercial activity, as shown by Mediterranean shipwrecks, which are commonly used to estimate maritime trade and overall economic activity.

After narrowing their search to shipwrecks from the appropriate time period and region, the scientists then observed shipwreck trends in both the ancient Greek and Roman eras, consistent with trends found in pollen and the cultivation of cereals, olives and vine.

Both lines of evidence suggest an economic boom in the 1st and 2nd centuries AD, a decline in the 4th and 5th centuries, and a weaker boom in the 6th century.

Finally, the researchers examined trends in the presence of large oil and wine presses in the Mediterranean.

The presence of these machines, although not located in Greece, indicates a pattern of broad economic trends in the region and a change in the incentives for producing large quantities of olive oil and wine.

Again, the researchers found that trends in archaeological discoveries of oil and wine presses were consistent with trends in grain, olive and vine production.

While the emergence of integrated markets and capitalist economies in the early modern era is considered to be the origin of the Anthropocene, the current epoch, in which humanity has emerged as a major geological force, this study shows that the structural developments that occurred on a large-scale European colonization from the 15th century onwards were indeed possible many thousands of years earlier.