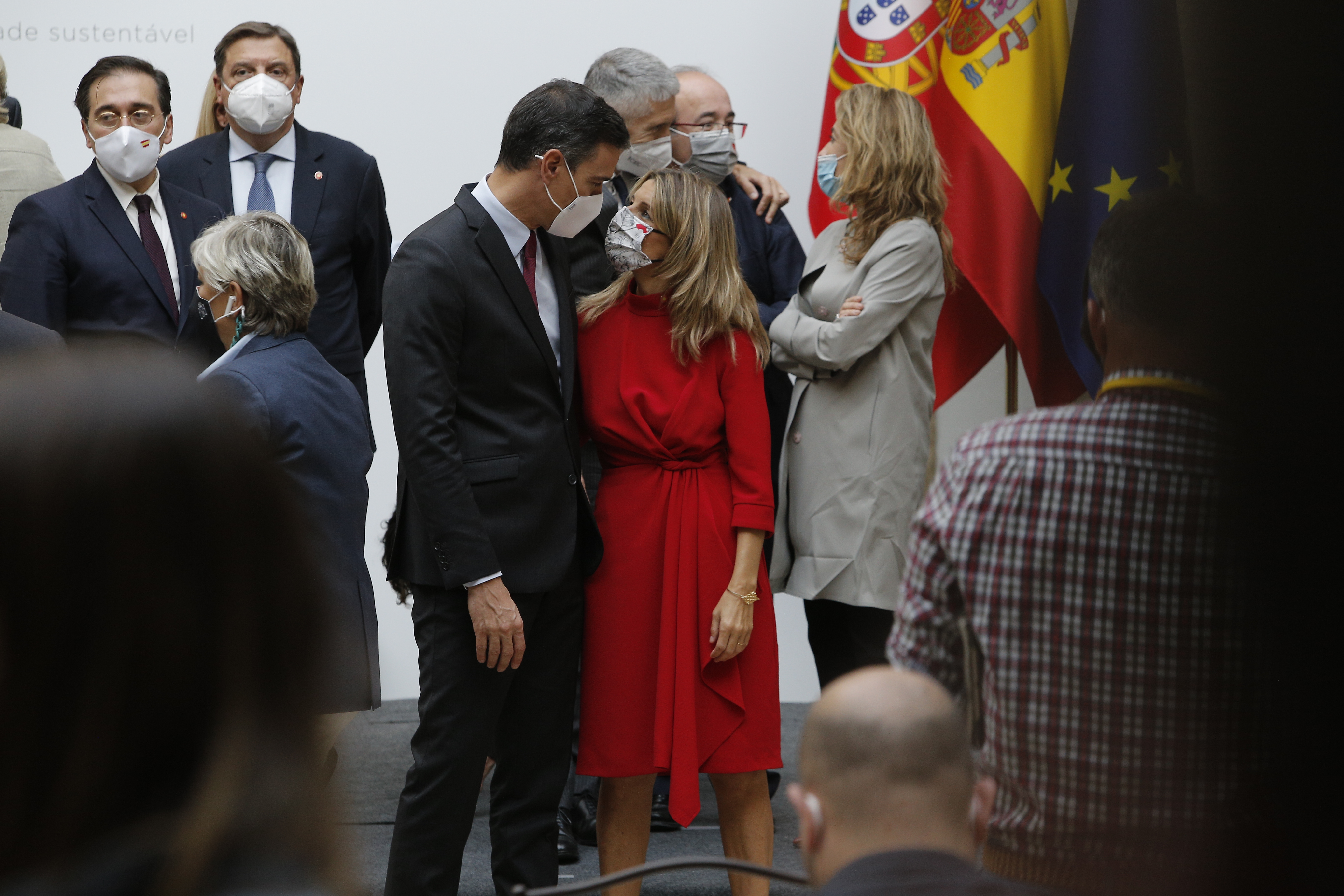 By Edward S. BaylorDecember 26, 2021No Comments

The first coalition government in this democratic history of Spain is measured by the most divided Parliament, with the record of 16 parties in Congress and with more pro-independence deputies than ever (35), from various parties. If they were together, they would form the third group of the House, paired with United We Can, in turn an agglomeration of brands and currents. And all this in a hangover scenario and citizen fatigue after several economic crises, now resulting from the pandemic, and with the emergence of acronyms and ideologies close to right and left populism. In the Cortes, the debates are boring as a whole, with more interventions; but shorter and more tense, intended for social networks.

The two-party system that ruled the country for 41 years is under study and the majority of politicians consulted conclude that nostalgia no longer makes sense. They speak of coalitions, pacts and dialogue, but they do not test it very much.

The Second Vice-President of the Executive, Yolanda DÃ­az, in the midst of the construction phase of a platform that transcends the initials considered so far, makes her diagnosis: â€œParliaments in democratic societies represent the plurality of visions of the reality and interests of a country. Since the 2008 financial crisis, we have seen traditional party systems in Europe falter, as the response of conservatives and social democrats, with austerity and cuts, left citizens unprotected and generated huge social unrest. In Spain, this meant the beginning of the end of bipartisanship â€.

The attribution of political fragmentation in Spain to the result of economic crises is an almost general conclusion. The Galician president, the popular Alberto NÃºÃ±ez FeijÃ³o, also underlines that these crises generated “a disaffection towards the traditional political class which favored the emergence of populist parties which promised to the citizens what they wanted to hear with a strategy of big bombastic headlines and impossible promises that affected the wear and tear that the traditional parties have already suffered due to the management of these unpopular and necessary measures â€. FeijÃ³o introduces his complaint there because the PSOE “has been infected by this way of doing politics” and has strengthened some of these new parties with their pacts.

The Basque Lehendakari ÃÃ±igo Urkullu, of the PNV, adds to the financial causes a policy that he describes as “scorched earth and no agreement” between the PSOE and the PP on their arrival in La Moncloa: “The two main Spanish political parties have historically considered that bipartisanship was structural and inherent in the political system. To gain and stay in power, they believed it was more profitable to destroy what the predecessor had done before making big earlier deals and to promote state pacts so that big laws and policies were structural and unrelated to them. changes in the political cycle â€.

The Catalan president, Pere AragonÃ©s, of ERC, interprets that until now â€œthe Spanish state has historically favored bipartisanship because of the need to strengthen the democratic system after 40 years of Francoism and this explains the difficulty of breaking with bipartisanship and that unlike many European countries, where coalition governments are common, Spain was governed until the current legislature by one-color governments â€. Aragonese stresses that the Catalan Parliament has been “traditionally much more plural and diverse and, therefore, with a much stronger culture of coalition and agreement” and values â€‹â€‹this disintegration as “a clear symptom of democratic quality, an invitation to debate , to play politics in order to reach agreements while thinking of the good of the society as a whole â€.

Join MRT to follow all the news and read without limits.

Juan Manuel Moreno, president of the Junta de AndalucÃ­a, of the PP, which governs with Ciudadanos, adds another guilt in the line attributed to having drawn Podemos â€œbetween politicians and the people, ignoring that the vast majority of people who devoted themselves to politics in this country, from city councilors to deputies in Congress, they were ordinary people â€.

Moreno notes that when Podemos entered executive power, â€œthe populists themselves realized that the politicians who were already there were at least as normal and ordinary as they and the citizens also verified that the internal power struggles in these populist movements that they are, in some cases, excessive â€.

The Valencian Ximo Puig, of the PSOE, who governs the tripartite pact of BotÃ nic in his community, assumes the political fragmentation with normality and without surprise because “Spain is not an island in Europe or in the world and bipartism already exists. in some countries â€. Puig points to two factors in the emergence of this phenomenon in the country: “The atomization occurs when the normal alternative of the Government is not strong enough, does not provide answers, and because the territorial situation is complex. . The Socialist thus believes that “the multiparty system is not a momentary virus” and normalizes it in the face of “the failings and the inability of national parties to adapt to the plural reality of the country”.

TomÃ¡s Guitarte, the deputy for Teruel Existe who broke “the glass ceiling” with “the revolt of Spain emptied” to represent it for the first time in Congress in this legislature, abounds in this idea: “The problems of depopulation and territorial imbalances were and are evident. Complaints and proposals reached the officials’ offices, but the solutions did not go beyond words or promises. Honestly, we felt cheated â€.

Guitarte sees political disintegration compatible with consensus, especially on issues like education, and gives the example of Finland. Urkullu supports this thesis, exposes the roots of coalitions and constant dialogue in the Basque Country and notes that in Spain political confrontation is a problem for 61% of the population (CEI) while in the Basque Country it drops to 17% ( Euskobarometer).

InÃ©s Arrimadas, leader of Ciudadanos, the party that claimed to be the arbiter of bipartisanship, supports “the necessity and the positive of a liberal and targeted space like those of Europe to survive, which overcomes the classic anomaly of the Spanish media red against the other blue means â€.

The president of Castilla-La Mancha, the socialist Emiliano GarcÃ­a-Page, who governs in his community with an absolute majority like FeijÃ³o in Galicia, complains about two things about the irruption in Spain of left and right populism: â€œOn the one hand, condition the central governments which have reigned in Europe since the Second World War. Another symptom that can be observed is the absence of transversal leadership; today they are sectarian, in part, bloc, and many people do not feel linked â€.
Juanma Moreno, president of Andalusia, of the PP, attacks “the exhaustion of these discourses” and underlines her impression that in the case of Podemos now, they “try to reinvent themselves as a fundamentally feminist project, in which it seems that marketing weighs more than ideas â€. And he detects in the proliferation of local projects, in empty Spain, “agrarian, local, simple speeches, without a global vision”. FeijÃ³o bets, from Galicia, which has recorded the rise and fall of the tides, that this measles will also occur in Spain and will return “a sincere policy, which manages with efficiency and solvency the problems of the citizens”.
Yolanda DÃ­az envisages medium-term projects which go beyond four years and reaffirms: â€œThe old days of bipartisanship are not going to return. There’s no point in being nostalgic for what it was. The people have shown by their vote that they feel represented by a plurality of options and that one-party governments are a thing of the past. There is a new culture of coalition and cooperation which is taking hold and which is part of the new country â€.