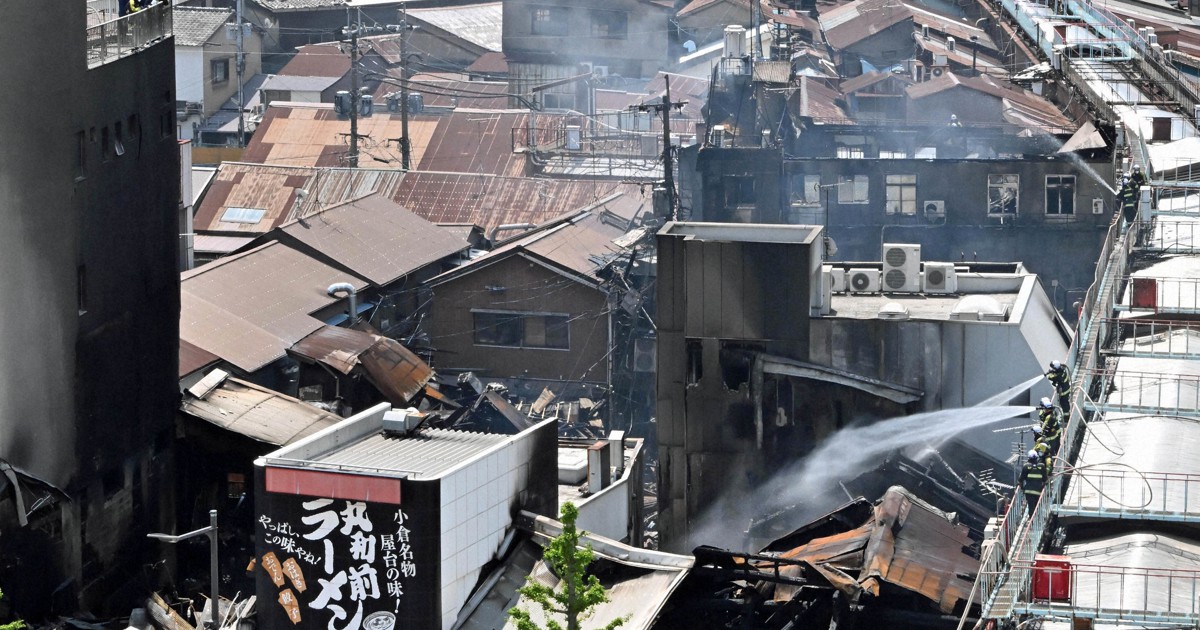 Locals in shock after huge fire at beloved Japanese market

KITAKYUSHU – A large fire that engulfed a section of a beloved market currently being redeveloped in this southwestern Japanese city has left residents in shock.

Tanga Market in the Kokurakita Ward of Kitakyushu City in Fukuoka Prefecture has a history of over 100 years and is well known to locals as the “Kitakyushu Kitchen”. The fire occurred before dawn on April 19 and more than 40 establishments, including restaurants, were reportedly set on fire. A redevelopment project to take action against deteriorating facilities and strengthen disaster preparedness had just begun in fiscal 2021. People affiliated with the market and locals watched the helpless destruction as the market, which had been woven into the fabric of everyday life, was unrecognizable. after the fire.

An 86-year-old woman who runs a restaurant in the market square was having a meal at the back of her restaurant around 3 a.m. on April 19, when a neighbor knocked on the door, shouting: “There is a fire! She saw flames and smoke rising from the back of the market as booming sounds echoed throughout the area. and if my neighbor had not told me, I could not have escaped.

A 64-year-old woman who works at a ramen shop near the site of the fire said she noticed the smell of something burning around 2:40 a.m. The store was open at the time, and just as she was talking with a customer. about the strange smell, a person rushed inside, urging them to escape as there was a fire. She tried to call the emergency number, but her shaking hand couldn’t control her phone. When firefighters arrived, they told her to leave the facility as there could be explosions, and she was forced to escape with only her keys and cellphone.

The blaze is believed to have burned most intensely in the “Shintanga Yokocho” area, which is home to yakitori grilled chicken skewer restaurants, yakiniku barbecue restaurants, long-established bars, and more.

Takafumi Yamauchi is the 51-year-old owner of Barrack, a bar which opened in 2003. He said, “I noticed the fire from the ambulance sirens and went back to the bar to get some money and my computer before leaving in a hurry. I saw fire from a second story window of a restaurant and was surprised to hear a loud explosion. The neighborhood association people are all friendly and I opened the bar because I like the nostalgic atmosphere, but that got lost in the fire. ”

Toshiko Kawano, 85, who has been running Shiro Bar for around 60 years, commented: “We had a reservation from Tokyo for the 19th, but we can’t do anything about it. The bar was tidy. want to see (the destruction).”

A woman in her 60s who runs a restaurant in the market said her fears had come true, as she pointed out that the tightly packed nature of buildings makes them susceptible to spreading.

A fishmonger’s worker in his 50s has raised concerns about the impact of the fire on his work, as he cannot enter the store to check the contents of the fridge.

Meanwhile, Tomomi Higuchi, the owner of the Kokura Showakan Cinema, which will celebrate its 83rd birthday this year, rushed to the scene around 6 a.m. Although the fire reached adjacent buildings, the destruction was limited to a few broken windows.

Higuchi, who was a friend of late actor Ken Takakura, received phone calls and emails from people affiliated with the film industry. Passing residents also approached her, including a person who was also affected by the fire, who said, “We have high hopes for Kokura Showakan. I’m glad he stayed. I will work hard to rebuild the area. In tears, Higuchi said, “I’m very grateful, but sad that many establishments were burnt down.”

Yoshitaka Tanaka, 43, a general manager of a company that had worked to revitalize the Tanga market after the project started, said: “The redevelopment was started with the aim of being prepared for fires like the recent one. I would like to give all my support to aim for the restoration of businesses as soon as possible. »

At a regular press conference on the morning of April 20, Kitakyushu Mayor Kenji Kitahashi said he would visit the scene of the fire with Fukuoka Governor Seitaro Hattori later that day. , and commented, “The fire happened as we were heading towards the redevelopment of the market. I would like to support the region while listening to the voices of the inhabitants.