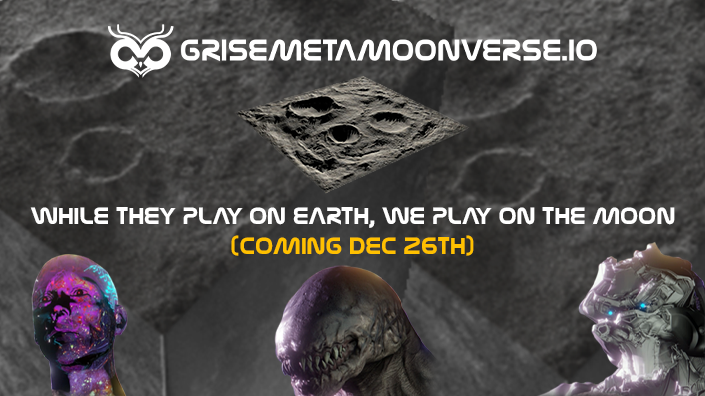 By Edward S. BaylorDecember 25, 2021No Comments

Chicago, Illinois, December 25, 2021, ZEXPRWIRE, 2022 will be the year of DAOs, tokenized auctions and the Metaverse. It’s safe to say that our alter ego needs a place to reside, and the best-suited place may be none other than the Metaverse. Billions are being invested in redefining the next virtual life experience. Even social media giant Facebook has bet its name on the Metaverse, renaming itself “Meta.”

Grise Metamoonverse is a project situating her metaverse through the Moon itself. If the earth has become a boring place for you, remember that now you have several options. Gray Metamoonverse is one of them. Grise believes that our beloved Earth is exhausting its resources and that there is an urgent need to turn to bodies located outside of space. Thus, the project inherited the idea of â€‹â€‹building a metaverse and dividing the area of â€‹â€‹the Moon into 10,000 equal pieces.

The developers of Grise are raising a Lunar Army, a support community based off the moon, where each of them will have access to Lunar Earth through GRISE NFT. There are different mechanisms in place that set the rules around this lunar metaverse. Detailed plans can be obtained discreetly on request from the team.

The complete Gray Metamoonverse contains different sections dedicated to providing consistent services for the proper functioning of the Metaverse. With plenty of plans planned for the Moonverse, the feature has yet to be released during the NFT launch slated for December 26.

Gray Metamoonverse also offers the NFT Marketplace, the NFT Collection, and an AI platform that opens up countless opportunities for the Moon Army to function and operate around the Metaverse with different abilities. Gray Metamoonverse is not just about owning an NFT, but rather an ecosystem that gives its community a place to reside and do their crypto transactions on a single platform without the need to hide around different platforms. , which are sometimes risky.

Their NFT collection includes NFT heads, which need to be tuned and developed into smart entities. Users can also own NFT Trippy Owl and NFT Moonland for the Metaverse.

A very well defined section of the metaverse with an excellent plan was completed in a very short time. The journey to lunar earth looks fluid and promising, the developers of Grise are determined that the community will not experience any turbulence during the base change from earth to moon. A recent example of the team reaching roadmap milestones can be taken from the recent accomplishments themselves. Grise has had great success in staking the pools for the contract and launching the BSC. He made a special difference by introducing his AI platform for stakes.

One of the most promising updates for Grise for this year has been its launch on the Cardano platform during this month. This clearly explains how the platform plans to be part of the mainstream digital market in the near future. Grise will surely take the win with this NFT launch through Cardano.

While enhancing its digital development as a solid NFT project, Grise Moon Metaverse is putting forward its dashboard to improve the gaming experience for its users. There are surely a lot of things that will follow the project shortly, including the development of the game concept and its explanation. Recently, Grise Moon Metaverse announced its partnership with The Collective, showing the goal of consistent and exponential growth in the digital market.

Gray MetaMoonverse is an NFT-based metaverse presenting users with a refreshed digital gaming experience on a completely different platform, the Moon. The project believes in building a community that understands the concept of living and thriving together.