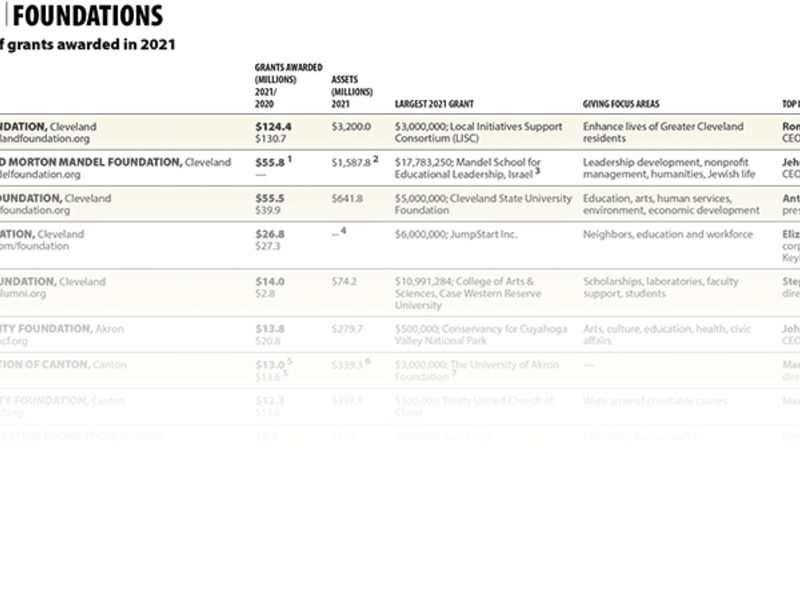 Sure, local foundations gave more money in 2021, but don’t be surprised if this trend doesn’t continue in 2022.

A weak stock market and economic volatility are hurting foundation asset levels and, in some cases, making it more difficult to raise donations, according to the organizations’ comments on Crain’s annual report. list ranking the largest granting foundations in northeast Ohio.

Of the 39 foundations on the full digital list, 18 answered an optional open-ended question about which trend is having the most impact on their organization. Seven of them mentioned the stock market or the economic gloom. Unprompted, four of these respondents specifically mentioned that these factors might cause them to reduce the amount of money they give.

One of those respondents was Ben Lee, president of the In His Footsteps Foundation of Independence. IHS, which supports Christian ministries and other charities, awarded a record $7 million in grants through 2021, placing it 13th on the list. And the value of assets held by IHS jumped 32% in 2021 thanks to new donations and investment performance, according to data submitted for the list.

But donations have declined in 2022, and the value of IHS’ investment portfolio has declined 17% so far this year, Lee said. And he’s not the only one seeing declines.

“A lot of people are in the same ballpark,” he said.

When the economy slows down, the foundations take a double whammy. The investment portfolios they use to fund their donations lose value with the stock market, and donors may be less generous. This is especially true of donors interested in donating stocks and other assets subject to capital gains tax. These donors are incentivized to make these donations when their values ​​are high, which allows them to avoid being taxed on the winnings and therefore make larger donations, Lee said, noting that these donations provide a “significant amount income” for IHS.

Additionally, most foundations average the value of their assets over the previous three years to determine how much to award, said Laura MacDonald, outgoing president of the USA Giving Foundation. This keeps the amount of grants awarded from swinging wildly, she said, noting that individual giving rises and falls much more than foundation giving.

But Lee noted that pessimism about the direction the economy is headed could cause foundations — and the donors they rely on — to hold onto their money.

“Donors and even foundations can lead with emotion rather than pure, raw data,” he said.

Of course, other issues also concern the leaders of the foundation. In response to the open-ended question about trends impacting their organization, four mentioned the lingering effects of COVID on those they support, and three mentioned issues related to equality or social justice.

The full Excel version of the list is available exclusively to Crain data members. To learn more, visit CrainsCleveland.com/data.