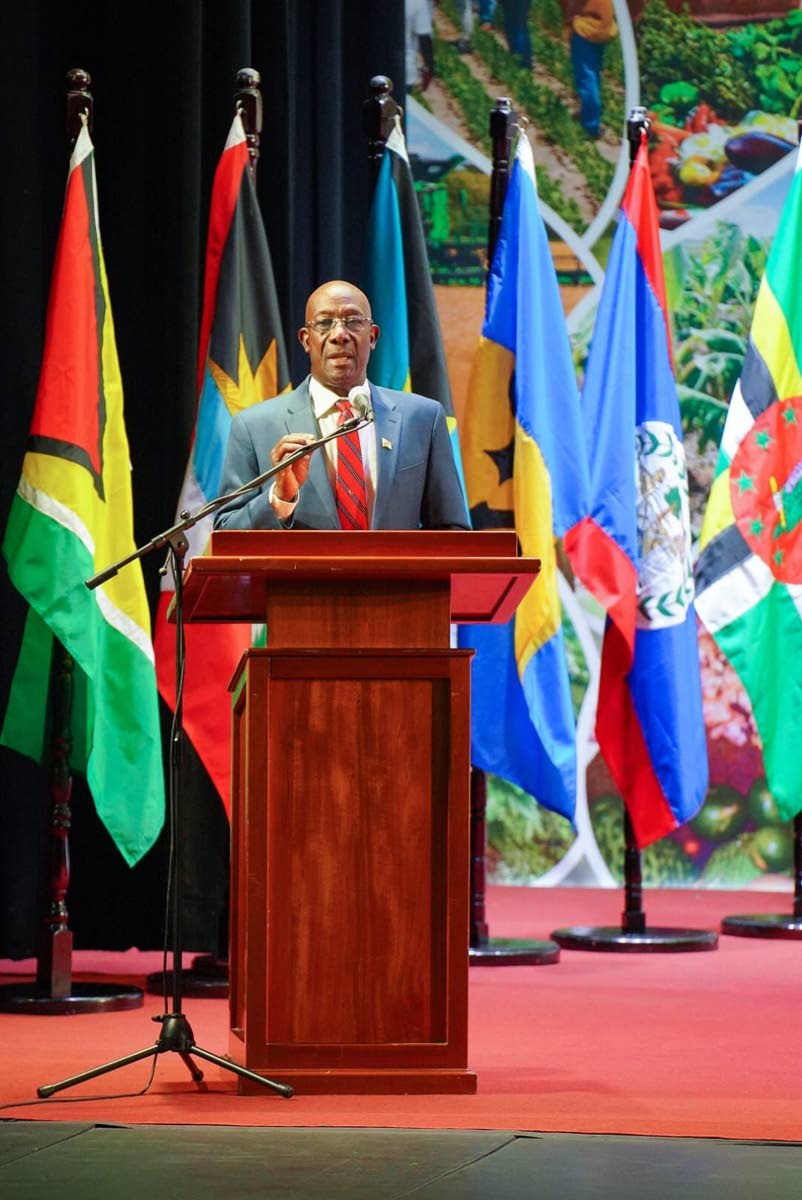 The Prime Minister called for economic unity in his address to the Caricom Agri Investment Forum and Expo in Guyana on Thursday, saying that unless Caricom recognizes itself as a single market economy and brings together its knowledge and talents, it will never achieve its common goals, such as food security.

“We know what to do. The question is, are we ready to do it? said Dr. Rowley.

“We cannot, as a small economy battling the winds that buffet us, as they have done so valiantly during the worst days of covid19, continue to operate on the basis of ‘you against me’ and ‘mine. against yours.” While we want to protect our current agriculture, while we want to ensure that our interests are not trampled on, we have to do what we have to do to increase production.

Rowley was part of a delegation of Caricom leaders who spoke at the opening of the exhibit.

Leaders such as Barbados Prime Minister Mia Mottley and Dominican Prime Minister Roosevelt Skerrit joined him for opening remarks. The exhibition is scheduled to run from May 19 to 21.

Rowley said the covid19 pandemic and resulting tensions over food security, medicine and food supply were a warning that the region needed a unified approach to food production, should another crisis arise.

“And for those who, in the worst days of covid19, heard our private sector tell us as a government that they could not place an order for a food supply, and that our ministry of health could not administer a vaccine, even though they had the money to buy it, but because we couldn’t buy a vaccine, we were warned.

“At the start of the pandemic, we saw that no one would come to our rescue and we will have to do it ourselves.

“When Barbados couldn’t buy half a dozen ventilators, we couldn’t buy a vaccine. Those who had them kept them for themselves.

“No one is going to give us food when there is little. We must act now so that next time we are in a better position.

He said during his visit to Guyana that he had spoken extensively with Guyanese President Irfaan Ali about increasing food production and food trade and they agreed that this cannot be done without a business model. He said Trinidad and Tobago is able to provide such a model that will help the region increase its food supply to meet any crisis.

Rowley also shared several ideas to boost business in the area and increase the ease of doing business. These included a single Caricom Business Registry – where, if an entity registers its business anywhere in Caricom, that registration would be valid in all Caricom countries.

He also talked about a Caricom ferry service to transport people and goods.

“When we were a federation – this fleeting existence that we had – the Canadian government gave us a gift. It involved two ships, the Federal Maple and the Federal Palm, which ascended and descended the Caricom. At no time that I can remember have people in this region been better connected and better served,” Rowley said.

“But at the end of the useful life of these ships, they were never replaced. Not because there was no reason to replace them and the job had been done, but that we independents hadn’t done the right thing to serve our people.

Rowley also suggested people change their diets based on what crops the area can produce. He lamented that not enough ground crops such as cassava and sweet potato are consumed. He also suggested diversifying crops regionally, with different crops being available for trade from different countries. He said that although other countries grow grains and other foods, this does not mean that the region has to grow the same varieties, and it is possible to obtain varieties of these products that suit different climates and conditions. the regional environment.

“That’s where our universities come in: TT University, University of Guyana, UWI. Our research must now identify for our producers the varieties that we can produce on a large scale, so that we can supply ourselves with inputs for animal feed.

“We want to see soybean fields in Belize and Guyana where there is land available. We want to see corn being harvested and grown in areas where it can be grown. »

However, he noted that there would be opponents to the idea of ​​Caricom being a single market economy. He said that two weeks ago his government introduced legislation in parliament that would increase the range of qualified people allowed to move between countries in the region and that they were facing a opposition.

“We have heard voices in our Parliament openly opposing and indicating that he will take jobs from our people,” he said. “We have to get away from that.”

Rowley said that while there would be people who would like to protect each country’s current agriculture and ensure that each country’s interest is not overlooked, the region must do what it can to increase the production.

“This increase in production will disrupt the status quo of current agreements,” he said. “This status quo will dominate the conversation about protection. and we will accomplish nothing. why do you think
Prime Minister Skerrit telling you today that he could sell avocados in Europe, but he can’t sell them 100 miles away? Why do you think we have so many production possibilities in the region, but there is no easy circulation of these products? A lot of it is about protecting the status quo.

After the contributions, the Caricom leaders were taken on a tour of the exhibition by President Ali, where the leaders reviewed innovations and new trends in agribusiness and agriculture.