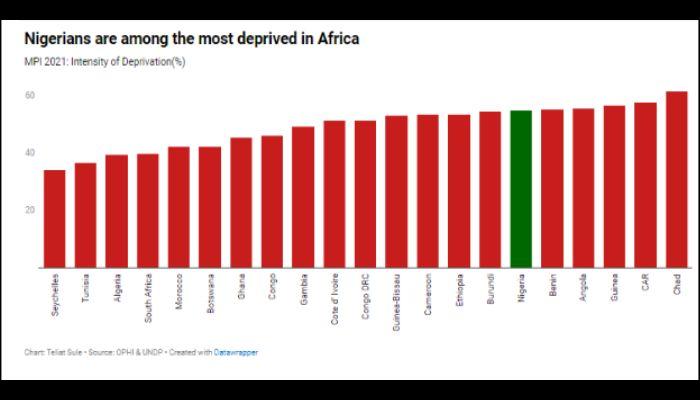 Atiku and Tinubu look at market economics as Buharinomics fails –

With less than a year to go from the end of the current government, an assessment of the Nigerian economy using a combination of measures shows the country’s situation is worse now than when President Muhammadu Buhari took power seven years ago.

For this reason, stakeholders said that business will not be business as usual for the next president as the country grapples with high inflation, high unemployment, insecurity, decrease in household purchasing power, the high cost of raw materials and the depreciation of the naira. .

From the outset, President Buhari’s stance was to fight corruption, insecurity and improve the living standards of Nigerians. In the latest Mo Ibrahim Index ranking, the Nigerian economy was classified as “increasingly deteriorating”.

The MPI assesses acute multidimensional poverty by comparing socio-economic progress in more than 100 developing countries. It measures the extent of deprivation suffered by individuals based on 10 indicators in three equally weighted categories, including health care, education and standard of living.

According to the University of Oxford, multidimensional poverty means poor health, lack of education, inadequate standard of living, disempowerment, poor quality work, threat of violence and living in dangerous areas for people. ‘environment.

When broken down further, the three major indicators above include nutrition, infant mortality, years of schooling, school attendance, and cooking fuel. Others are sanitation, drinking water, electricity, housing and assets. MPI values ​​range from 0 to 1, with higher values ​​indicating higher multidimensional poverty.

Nigeria’s MPI was derived from the country’s Demographic and Health Surveys conducted between 2015 and 2020, and collated from a sample of 90,919 people. And based on the assessment, Nigeria’s MPI score was 0.254 in 2021. A low score like Nigeria’s indicates a very high level of multidimensional poverty. The number of poor Nigerians is expected to reach 95 million by the end of 2022, according to the World Bank.

On what could have caused the high intensity of poverty in the country, the report attributes 78.3% of Nigeria’s multidimensional poverty to difficulties people face in accessing health care and education, as well as declining standard of living.

The Nigerian Medical Association recently said that more than 9,000 doctors have left Nigeria in search of greener pastures in the UK, US and Canada over the past two years.

The inaccessibility of quality health care caused 19.2% of the country’s multidimensional poverty, 30.9% was caused by inadequate education and 28.2% by the decline in living standards.

TI’s Corruption Perceptions Index has placed President Buhari’s anti-corruption campaign under intense scrutiny as Nigeria has not fared well in the rankings in recent years. Nigeria ranked 136th in 2015, having scored 26. They were ranked 144th in 2018 with a score of 27, while in 2021 they scored 24 and were ranked 154th in the world. A score of 100 means the country is very clean while zero indicates a very corrupt country.

The number of high profile corruption cases uncovered over the past few years will leave no one in doubt as to TI’s ranking for Nigeria. Just recently, the country’s Accountant General was suspended for allegedly embezzling over N100 billion; Ibrahim Magu, the former chairman of the Economic and Financial Crimes Commission was removed from office after being accused of embezzling recovered funds and seized assets, while the former chief executive of the Development Commission of the Niger Delta was arrested over an allegation of fraud amounting to 47 billion naira. .

“TI’s Corruption Rating is a perception of how corrupt a system is. With the country’s consistently low rating, Nigeria is seen as corrupt. It may also mean that the system that has been put in place to control corrupt practices is not effective,” said Moses Ojo, a Lagos-based economic analyst. 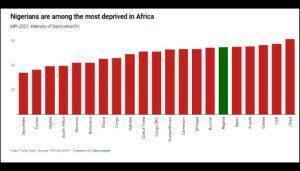 According to Ojo, with low life expectancy, high poverty level and declining purchasing power, the country’s HDI is expected to be low, which will impact the contribution of the people. impact on economic production.

How Atiku, Tinubu Will Be Different

The positive sentiment followed the rapid publication of the economic agendas of the main presidential candidates, as this should increase the level of engagement with the electorate and provide room for the scrutiny of their programs ahead of the 2023 general elections.

Atiku Abubakar and Bola Tinubu, standard bearers of the main opposition People’s Democratic Party and the ruling Congress of All Progressives, unveiled their economic programs on Thursday.

“There are many options available to them to revive the economy. On the monetary side, the CBN needs to control inflation and float the naira. Fiscally, the government needs to reduce its size, resolve insecurity, deregulate the energy and electricity sectors,” said Abiola Gbemisola, investment analyst at FBNQuest Merchant Bank.

Both presidential candidates favor a market economy. This is why stakeholders believe that they will deviate from President Buhari’s style of economic management.

Announcing its economic program a few days ago, Atiku anchored its programs on three principles, which reaffirm the critical sector of private leadership and greater private sector participation, reposition the public sector for better service delivery and enable a framework Appropriate legal for quick saving and social action. development.

“I will let the market have more leverage to determine prices; we will thus eliminate the persistent price distortions caused by the current interventionist exchange rate management policy. Government interventions, where absolutely necessary, will be done responsibly and wisely,” he said.

According to him, if elected as the next president, he would focus on job creation, put Nigeria to work by launching a major program of public works, with large and heavy investments channeled into infrastructure, as well as the value-added manufacturing and agriculture.

It would anchor its economic growth plan on the establishment of sub-regional industrial hubs to exploit the competitive advantage of each area and optimize their potential for industrial growth.

“My administration will build an efficient, fast-growing, well-diversified emerging economy with real GDP growing averaging 12% per year over the next four years, translating into millions of new jobs over that time” , said Tinubu.